I’ve had yet another great honour of visiting a stunning show in Beijing. It is perhaps the destiny of my horoscope to engage in brilliant performances that make me grow and learn as a person on this earth. The show is held at the Happy Valley in Beijing which accommodates the huge and magnificent OCT Theatre, where the stars are born and aligned. Here is my personal experience from there! 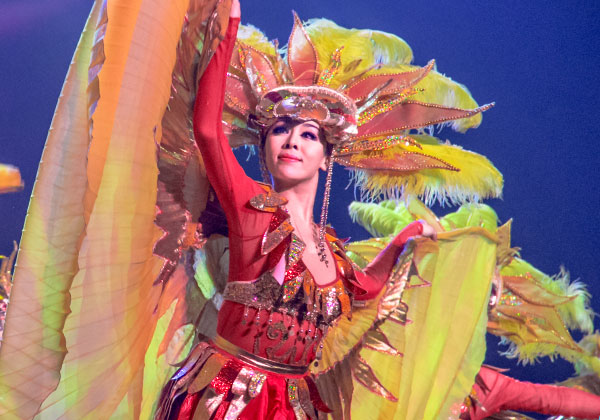 The Golden Mask Dynasty Show is an original Chinese grand musical drama which plays at the Happy Valley OCT Theater in Chaoyang District, Beijing. The captivating show tells the fairy-like tale of a queen who wore a golden mask and created one of the most magnificent dynasties in ancient China. It is a story of royalty, wars, love, romance, forgiveness, and sacrifice.

— Find out about the amazing show from the Happy Valley Beijing website!

The 70-minute show features 20 different dance sequences which represent the harmony and romantic ethos of the legend. Audiences will be thrilled and mesmerised by the singing, dancing, martial arts, acrobatics, and other awesome acts performed by over 200 highly skilled performers and actors. Produced by Chinese directors, playwrights, and designers and first shown over ten years ago, the Golden Mask Dynasty Show has continued to evolve and received much critical acclaim and attained cult status over the years.

OCT or Overseas Chinese Town sponsored the Golden Mask Dynasty drama play together with the Happy Valley where the actual theatre is located and put in millions of yuans to construct the theater for the show. The theater is spread across 22,000 sq. meters and adorned with a chic ambiance. The atmosphere in the interiors is wondrous and is embellished with a magnificent stage that is shaped like an arc and considered as the ‘first big proscenium’ in Beijing. The unique design of the 7 meters high and 16 meters long stage allows it to do a 360 degree turn. The performers and actors can still stay on the stage and keep dancing when the stage is rotating!

The OCT Theater features numerous advanced stage technologies such as use of audio devices that throws out voices to all corners of the stage so that viewers can hear every sound, use of three-dimensional N+N multi-channel fantasy control technology, and excellent viewing angles from everywhere, thereby making the show a spectacular visual-audio treat.

Divided into eight chapters, the Golden Mask Dynasty Show in Beijing tells the magical story of the Golden Mask Queen of ancient mystical China. The queen wore a golden mask and created one of the most glorious dynasties in China. She led her army and marched against the Blue Mask King and defeated him.

After the war was over, the Golden Mask Queen forged an ‘enigmatic tree’ so as to seek blessings for the dynasty and her subjects. A majestic celebration was held when the tree grew up. The Queen also released the soldiers of the Blue Dynasty. This act of compassion and tolerance moved the Blue Dynasty king and he started admiring the queen. They soon fell in love and romance blossomed.

Later, the kingdom was wrecked by monstrous floods. The queen sacrificed herself after seeking guidance from the tree so as to stop the floods. Before she sacrificed herself, she bade farewell to the Blue king. The floods soon subsided. The king continued to love the queen and the subjects of the kingdom were grateful for her sacrifice.

The queen later turned into a golden beautiful sunbird. She continued to look out for the well-being and happiness of the people of her kingdom by flying across the skies above her kingdom.

..Or at least, so the story goes. Hope you enjoyed my experience and hope to get back to horoscopes soon. Until then, if you are in Beijing.. simply do not miss the Happy Valley experience!